The Nellie Pederson Civic Library in Clifton announced that it now has over 1,000 titles in its DVD collection for folks to check out for free. Donated by a local booster club, the 1,000th film was written by Academy Award-nominated screenwriter and Cranfills Gap, Texas-born Taylor Sheridan. The film, “Hell or High Water”, follows two brothers (Chris Pine and Ben Foster) who aim to save their family’s ranch by robbing banks while pursued by two Texas Rangers (Jeff Bridges and Gil Birmingham). In its initial theatrical release in 2016, Sheridan’s neo-western heist thriller opened to critical acclaim, receiving four Oscar nominations and three Golden Globes nominations in 2017.

The new “Friends of the Nellie Pederson Civic Library” group donated this and two more of Sheridan’s films in order to spotlight the storytellers from Bosque County and enhance the value of Clifton’s public library.

“Not only is our library a center for uplifting the creative spirit in all of us, but this public space is also an entertainment venue for all ages to explore and enjoy,” said Nathan Diebenow, a friends group volunteer.

The Clifton public library houses over 10,000 book titles, a number of which were written by authors who are native, new, and former residents of Bosque County, like Kelsey Bryant, Grant Ferguson, and Lisa Wingate.

“We’re very proud to have such creative talent in Clifton and Bosque County as well as community-minded partners and groups who go the extra mile in support of our public library,” said Executive Director Lewis Stansell of the Nellie Pederson Civic Library.

Stansell noted that in 2019, the library attracted 13,000 unique in-person visits to its building behind Clifton City Hall. Due to the pandemic, the library’s foot traffic dropped by about half, but Stansell said he expects community partners to return as more folks practice public health habits and vaccines roll out this year.

Angela Smith, Clifton Community Development Coordinator and the Nellie Pederson Civic Library Advisory Board President, thanked the Nellie’s friends group and all the taxpayers within the city limits for supporting Clifton’s public library, its staff, and its services.

“Our public library is an important place in our community because it connects people of many different backgrounds through print and audio-visual media as well as face-to-face interactions.” – Smith.

Folks of all ages can borrow DVDs, books, and audiobooks on CD for free during the library’s operating hours 9 a.m. – 4:30 p.m., Monday – Friday. The library is closed on weekends.

Members of the public with a Clifton library account can borrow the films on DVD five at a time for up to two weeks.

To get a library account, visit the library with photo identification and a proof of residence, such as a water bill. To review materials on the library’s catalog online, click here. For more information, call the library at (254) 675-6495 or email cliftonlib@cliftontexas.us.

For 21 years, the Nellie Pederson Civic Library has been located at 406 Live Oak Street, two blocks from historic downtown Clifton behind Clifton City Hall. To prevent the spread of the pandemic, community partners and visitors to the library are asked to wear face masks and practice social distancing. Hand sanitizer is present along with plexiglass barriers installed at the reference desk.

To learn more about the “Friends of the Nellie Pederson Civic Library” group, visit www.facebook.com/cliftontexaslibraryfriends. 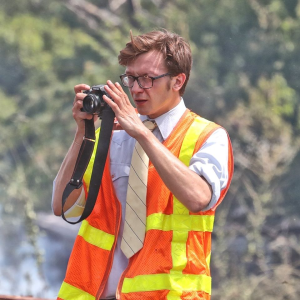 Arthur DeVitalis has been in and out of Bosque County since he was a child, and grew up deep in the heart of Texas. He's been a resident of the Hill Country and central Texas for 21 years. He came from Toronto, Ontario to small-town Texas. Today as a Texanadian, Arthur is a journalism graduate of the University of Texas of Austin, a visual storyteller, audio producer, editor, publisher and writer. He's inspired by local history, individuals that unify people to serve others, and art in every medium.
All Posts »
PrevPreviousCentral Texas Youth Fair, 70th Annual Rodeo set for June 2021
NextMeridian Ministerial Alliance hosts successful Egg Hunt for Youth, shares Resurrection storyNext
Menu